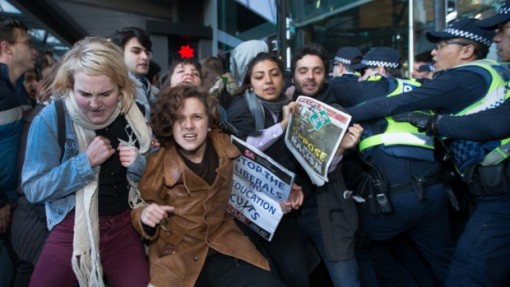 Mr Lesh, who is the National Union of Students Victorian branch general secretary, later condemned the protest, which was organised by another of the union’s executive branch members.

“I was disgusted by the way the extremists tried to stop me from entering the event,” Mr Lesh said in a press release.

“The aggressive actions of the extremist few give all students a bad name.” Mr Lesh, who accused the protesters of wasting police resources and causing “unnecessary mayhem”, said he was not consulted before the protest.

“I am disgusted by the lack of consultation and consideration of different views in the National Union of Students,” he said.

This article was originally published in The Age, July 31 2015.