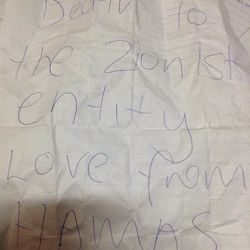 EDUCATION Minister Christopher Pyne has called on Australian universities to take a firm stand against racism on campus following anti-Semitic incidents at three universities in the past week.

According to the Australasian Union of Jewish Students (AUJS), members of far-left group the Socialist Alternative harassed and intimidated Jewish students in incidents at the Australian National University (ANU) and the University of New South Wales (UNSW) during O-Week activities.

At the University of Adelaide, anti-Semitic graffiti was discovered on a campus sign that had been defaced with the slogan “No Jew world order” next to a Star of David containing the number 666.

In the wake of the incidents, a spokesperson for Pyne said: “Free speech in Australia does not extend to threats, intimidation and physical harassment. Incidents such as these have no place on campus or anywhere else.”

Pyne’s office added that the anti-Israel Boycott, Divestment and Sanctions (BDS) movement had given anti-Semitism “a fashionability among highly ignorant sections of the far left”.

“The nature of the hostility and the epithets directed against Jewish students are unambiguously anti-Semitic. The veneer of anti-Zionism is wearing increasingly thin,” he said.

AUJS national political affairs director Matthew Lesh said there is no doubt that it was Socialist Alternative members involved in the ANU and UNSW incidents, despite that group’s denials.

He said a paper airplane thrown at the ANU Jewish Students’ Society stall bearing the scrawled message “Death to the Zionist entity Love from Hamas” was folded from a Socialist Alternative petition, while the comments “Israeli bitch” and “dirty Jew” were made by people handing out Socialist Alternative pamphlets.

He added that two individuals who harassed a Jewish student with an AUJS bag at UNSW, when asked who they were, replied that they were from the Socialist Alternative.

He said both have since been identified as previously having been involved in intimidating Jewish ­students.

But Corey Oakley, the editor of Socialist Alternative publication Red Flag, said reports of the incidents were “baseless” and accused AUJS of ­“making up lies”.

He denied members of the group were at UNSW on the day the incident occurred there.

And although Oakley admitted to not having knowledge of what had transpired at ANU, he nonetheless ruled out the possibility of Socialist Alternative members being involved there.

“We completely reject that we made any of those comments. In particular, the vile anti-Semitism that we were alleged to have made is a preposterous accusation,” he told The AJN.

ANU pro-vice-chancellor (student experience) Richard Baker has met with the Jewish students involved and has raised the allegations with the Socialist Alternative in writing.

The university is also checking CCTV footage to see if any incident was captured.

“Tolerance of diversity and the free debate of ideas are fundamental to the concept of a university.

“Moreover, the university has a responsibility to provide its students with a safe and secure study environment, and threatening behaviour such as this cannot be permitted.”

A UNSW spokesperson said the incident there was also being investigated.

“UNSW deplores all forms of racism and discrimination, and considers such behaviour unacceptable,” the spokesperson said.

Students who face incidents on campus are encouraged to report them immediately through the new website, www.reportantisemitism.com, a joint project of AUJS and the B’nai B’rith Anti-Defamation Commission.

This article was originally published in The Australian Jewish News March 6 2014.